'A while back I was on my way at the trainstation. Because of waiting, I sneaked around in a small bookstore over there. On that point I realized that I miss a lot of books from one of my favorite book authors Preston&Child and Stephen King, so I decided to make a book wishlist. Offcourse I have a few other books I want so here it is, my most recent book wishlist at this moment. The Preston&Child and Stephen King ones are easy to find here in Holland and on the internet. I have also a few wich aren't so easy to find. I read mostly in Dutch, so these frontcovers are in Dutch. From some of them I know the English title, but I'm terribly sorry if I don't know what's the English title should be.' 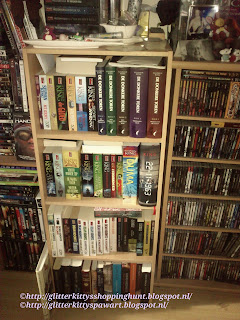 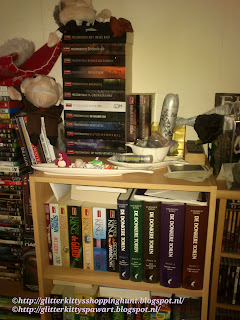 My bookcase at the moment... please don't look at the mess ^_^

Stephen King ~ Gevangen (Under The Dome)

'I also have a few wich aren't available in pocket yet. Those are mostly €10 and up.'

'And here are a few books I miss wich I like to buy in hardcover or softcover, but aren't pockets. I believe those are €10 - €15 and up.'

'Books wich I read as a child and liked the most. If you search carefully you will find them, but overall most are hard to find. So I have no idea about the prices of these.'

'Lastly I came across this book in English. Prices depends on where you buy the book.' 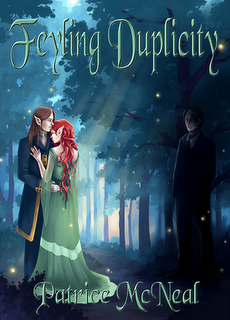 Note:
'Pics are taken from Google, or pics are screenshotted by myself, so thanks to their owners.'
Written by GlitterKitty/ SJM